Coonoor – The Land of Tea, Hills and Forests

Coonoor is a hill station in the Nilgiris hills alongside Ooty and Kotagiri of Tamil Nadu, India. It’sbest known for tea gardens that produce the famed Nilgiri tea. The city at Hulikal ravine’s edge is home to Toda tribals for centuries. The second largest hill station after Ooty with its mild weather through the year, is ideally suited for weekend trips.City is well-connected by roads with other major towns,withCoimbatore for air connectivity with other Indian cities. Nilgiri Mountain Railway, a narrow-gauge train service connects the city to Mettupalayam. As one of the oldest mountain railways in India,it was declared a UNESCO World Heritage Site in 2005. Coonoor,evolved as tourist destination alongside Ooty in 19th century, when Britishers started developing it as hill station to escape hotsummers.

Coonoor is famous for its residential schools and students from across India come here to study.Offering a beautiful panoramic view of large part of Nilgiri hills;seasonal tourist traffic is the prime economic activity in city, alongside tea plantations. Best time to visitis from March to June and September to October. The city organizes several festivals to promote its local products such as aFruits and vegetable festival in May and a tea and tourism festival every winter. The city has numeroushotels and lodges; allowing tourists a place to stay as per their budget. City is especially famous for luxurious homestays where numerous British era villas are let out by owners for tourists to stay-in. Those interested in drinks can enjoy themselves in pubs mostly around Club road. There are several fine-dining restaurants in city that serve a delectable range of Italian, Indian, Chinese, North and South Indian veg and non-veg dishes.

The cityis home to many Indian army establishments like Madras Regimental Center (MRC) and Defence Services Staff College (DSSC); UPASI Tea Research Foundation which is intoresearch, commerce and auction of tea.The city alsohousesthe Pomological Station, a centre for research in pomegranates, persimmon, and apricot;and Central Silk Board’s silkworm breeding station and silk farm at Springfield. The city and its surrounding forests are a birdwatcher’s paradise with numerous bird species to watch such as cormorants, pipits, babblers, vultures, eagles, cuckoos, song bird, parakeets, Nilgiri verditer, skylarks and more. Coonooris haven for thrill seekers who want to go on trekking and hiking excursions in forests and hills around the city. City has many tourism agencies with registered tourist guides to conduct such excursions on regular basis. Moviegoers can watch latest films in the single screen theaters. 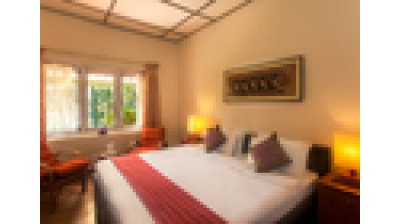 Time tiptoes past in this charmed space embedded in glistening green tea plantations. The clamour of.....