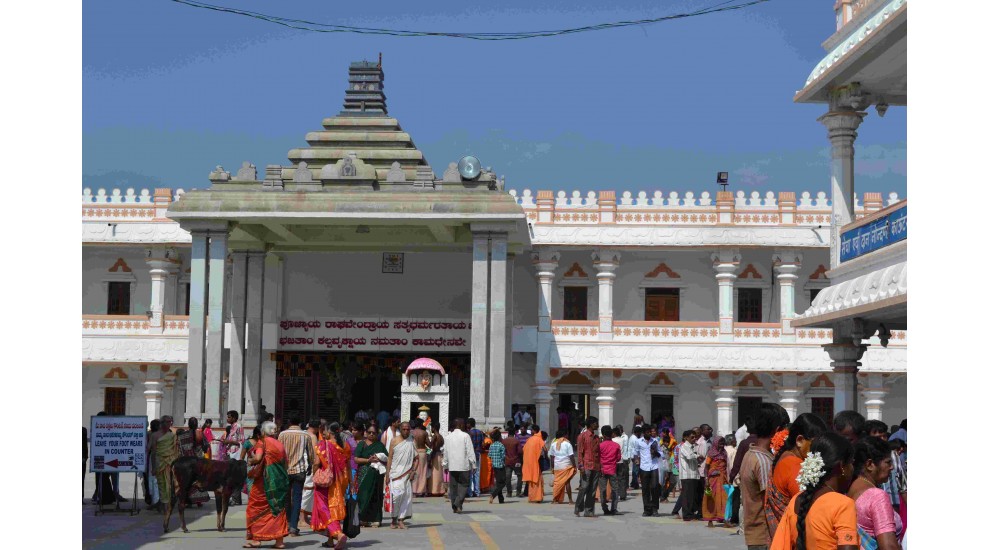 The pilgrim village Mantralayam is a serene spot on the banks of Tungabhadra River in the Kurnool district of Karnataka. It is on the border of Andhra Pradesh and Karnataka. Mantralayam is popular as Brundavan of Saint Raghavendra Swamy. The weather is pleasant from July to March, which is the best time for the devotees to visit Mantralayam.

The main attraction of Mantralayam is Raghavendra Swamy temple. It is 1 km from Mantralayam bus stand. The Raghavendra Swamy took birth to Thimmanna Bhattu, scholar in Vedas, Sastras and accomplished as Veena player and her pious wife, Gopamba. He was their second son who was born by the grace of Lord Venkateswara. He was named Venkatanatha. He was the disciple of Sri Sudhindra Tirtha and completed his studies in ‘Tarka’ and ‘Vedanta’. Later he took sannyas and known as Sri Raghavendra Theertha. He was the man of great miraculous powers, spiritual excellence.

There is an idol of Lord Venkateswara in the black stone inside the sanctum, and it is believed that Raghavendra Swamy himself worshipped that idol in the temple during his tenure. The figures of Lord Vishnu and his consorts have made the temple beautiful. The Tungabhadra River is flowing just behind the temple which is also worth seeing.

In 1670 AD Sri Raghavendra Swamy entered into Jeeva Samadhi at this spot of Brundavan in the presence of his disciples and hundreds of devotees. The devotees believe that Swamy still exists in his holy form and he will stay for another 700 years from the time he attained divine Samadhi. In Brundavan-Samadhi Temple there is a practice to carry the idol of the saint around the temple in a chariot and the elephants inside the temple pay homage to the deity. There are four kinds of chariot plated in - Golden, Silver, sandalwood and a new one studded with Navaratna stones (Nine precious stones). Golden Chariot is used in special occasions. You can witness this spectacular sight every evening at 8pm.

The male devotees have to wear Dhoti inside the temple, and the women have to wear Saree and other traditional dresses. ‘Parimalam prasadams’ are unique kind of Prasad that is offered to the deity and given from the counters outside the sanctum.

Located on the northern-west corner of Brundavan Temple, it is the second important spot in Mantralayam. It is a mini temple with colourful vimana with many figures of Parvathi. The presiding deity is Maa Parvathi which is a 3 feet tall idol placed inside the sanctum on a high platform. It is practice to worship Maa Parvathi first before visiting Sri Raghavendra Swami Temple. Earlier Mantralayam was known as Manchali named after deity Manchalamma.

Located at the Panchamukhi of Karnataka, it is on the other side of the Tungabhadra River. Panchamukhi Anjaneya Temple is a significant pilgrimage spot for the devotees. Sri Guru Swami Raghavendra performed meditation for 12 years before he settled in Mantralayam and it is said that Lord Venkateswara, Lord Vishnu as Varaha, Panchamukhi Anjaneya and Kolhapur Mahalakshmi appeared after the meditation.

Located on the hillock, this is an ancient temple of five headed hanuman or Panchamukha Anjaneya. Here the presiding deity is Lord Hanuman, and the idol is a huge self-made rock. The devotees in large number visit this spot on the occasion of Hanuman Jayanti. Regular buses and other private vehicles are available from Mantralayam to visit this place.

There are many options for hotels and lodges in Mantralayam. There is a system of providing cottages to devotees performing special sevas by the temple authority. Food is also readily available and affordable. Many shops are found in front of the temple selling food and drinks.