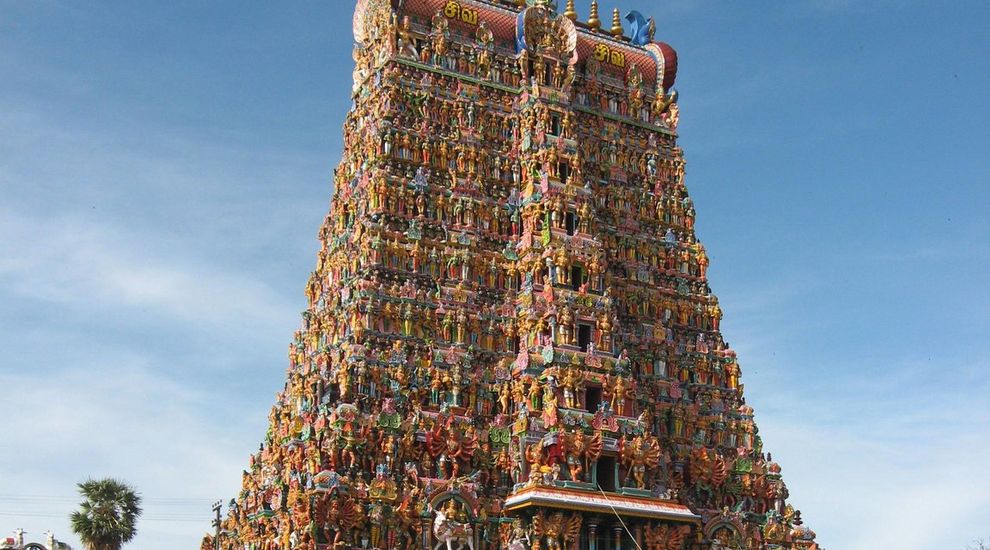 Madurai, the third largest city in Tamil Nadu, is one of the popular pilgrimage centers in India. This Temple City located on the banks of River Vaigai is famous for the Madurai Meenakshi Temple. Madurai, with a history that dates back to 3rd Century BC, was established by the Pandyas and later ruled by Cholas, Madurai Sultanate, Vijayanagara, Madurai Nayaks and the British. This cultural capital of Tamil Nadu is blessed with several temples and historical monuments that attract millions of tourists every year from India and abroad. The city is live with visitors throughout day and night and is popularly called as Thoonga Nagaram, which means “the city that never sleeps”. Madurai Airport is located just 12 km from the city. Madurai Junction railway station is well connected to major cities in India. The city has a good road network connecting several National Highways and State Highways.

Madura Meenakshi Temple: Madurai is well known by this temple, which is an architectural marvel and one of the most important temples in India. It is dedicated to Meenakshi, a form of Goddess Parvati, and Sundareswar a form of Lord Shiva.

Thirumalai Nayak Palace: This wonderful palace complex was built in 1636 by Madurai ruler Thirumalai Nayak in Indo-Saracen style of architecture. Highlight of this palace is the daily light and sound show that depicts the story of Chilappathikaram in English and Tamil languages.

Thiruparankundram Temple: This famous temple with amazing architectural features is dedicated to Lord Muruga. It is one of the six abodes of the Lord and is regarded as the first temple of Lord Muruga.

Alagar Koil Temple:Situated on Alagar Hills, it is a beautiful temple dedicated to Lord Vishnu. The stone idol of the deity is known as Kallalgar.

Pazhamudhir Solai: This temple dedicated to Lord Muruga is located on a hill top near the Alagar Koil Temple. It is also one of the six important abodes of Lord Muruga.

Gandhi Memorial Museum: Built in 1959, it is one of the five Gandhi memorial museums in the country. It has the blood stained dhoti worn by Gandhi when he was assassinated.

Vandiyur Mariamman Teppukulam: It is a huge square shaped temple pond near Vandiyur Mariyamman temple. There is a Mandapam with a Vinayagar temple and garden in the centre of the pond.

Madurai is famous for shopping cotton fabrics, Sugundhi sarees and Batik. Puthu Mandapam, a hall near the entrance of Meenakshi Temple, is the ideal place for Batik and cotton fabrics. Haje Moosa Textiles is the best place for Sugandhi Sarees and handlooms. Good handicrafts, bronze images, wood and stone carvings, etc., can be purchased from Government Handicrafts Emporiums, Cottage Arts Emporium, Poompuhar Handicrafts, and Madurai Gallery.

Madurai is a vibrant city which has a large number of visitors every day. Though it is basically a religious city it offers a plenty of entertainment and nightlife to the tourists. Some of the bars and pubs in Madurai include Sangam Bar, Cloud 7, Impala Bar, Tasty Bar, Freedom Bar, and Festival Bar, which provide drinks, music and entertainment.

Visitors can spend their day by visiting various temples, Dargahs, pilgrimage centers and historical and cultural monuments of the city. Other than indulging in devotional activities, one can spend some relaxing moments by visiting museums, dams, Water Theme Parks, and many other picnic spots. The sound and light sow organized at Thirumalai Nayak Palace is a must-visit event.